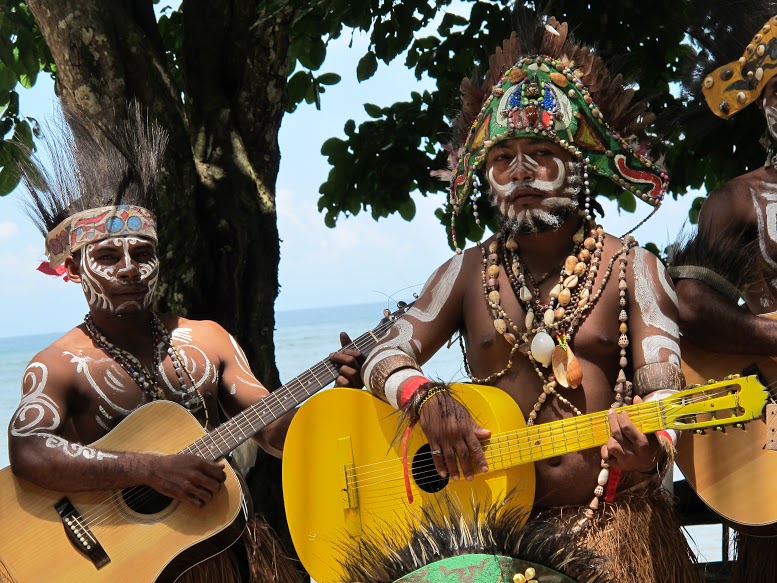 One of Max Binur’s earlier memories is of a journey he took with his father from his village to Biak. At the strait of Sorendiweri, Free Papua Movement fighters, who were active in West Biak, shot at them.

“We survived by sailing further out in the sea. Later I asked my Father why they wanted to shoot us.” He replied, “One day you will know the answer.”

Over time he learned the answers, but he was frustrated by the injustice and human rights abuses that ordinary Papuans suffered. He decided to devote his life to fighting against them.

Today Max works on human rights and justice issues by using arts and culture as a tool for resistance.

“While there are many organisations working on the issue in Papua, they ignore cultural space as a basis for struggle,” he says. “I am a Biak man, it will be easier for me to go to Biak communities, and understand the language, art and cultural aspects of their life.”

Together with friends, he established Belantara Papua. Their approach was inspired by the cultural movement led by Arnold AP, a musician from Mambesak, who was renowned in Papua for using music as a tool for unity and struggle.

“Our house was often a meeting point for young people. They built instruments, wrote songs, painted and made sculptures. After a year, we thought of officially creating it as a hub for these young people,” Max says.

“The name ‘belantara’ refers to the culture of Papua, which is inseparable from its natural environment. The Papuans are born in and learn to live from the nature. In the forest people learn about soil fertility, trees and seasons. It is no surprise that all basic Papuan dance moves are inspired by the movements of birds, hunters and fishermen, all of which merge to make something beautiful,” he says.

There are no training programs in Belantara Papua. Instead, they spend time in villages learning skills from local elders and documenting these various art forms so young people can use the knowledge. “Every one who has learnt in Belantara Papua can develop their own cultural centre in their village,” he says.

The method is particularly important given the limited space and opportunities for artistic expression in Papua. Government-organised art festivals are the only available opportunities, and artists have to seek permission to host such events. “When we host our own events, we are often considered subversive, disturbing security,” he says.

We need to be bold, Max says. “Natural resources of Papua are being depleted every day, being usurped by giant industries. All we have are our art traditions passed down by our elders. If that is gone too, what else do we have left?”