On 27 November 2015 in Leiden, The Netherlands, KITLV, or the Royal Netherlands Institute of Southeast Asian and Carribean Studies, held a seminar titled ‘EngageMedia’s Papuan Voices: Video and Empowerment’.

The seminar was attended by around 20 people who were mostly researchers and PhD students, and 3 films from both volumes; Love Letter to the Soldier, Wamena and Pearl in the Noken, were screened.Fridus Steijlen, a senior researcher at KITLV, opened the event with a brief description aboutEngageMedia and its Papuan Voices project.

Hendriati Trianita, a former Program Manager at EngageMedia, and Ligia Giai, a Masters student in Global History at Leiden University of Papuan origin were discussants of the films. Trianita spoke about the process of making the films and Giai about how impressed she was by ‘Pearl in the Noken’, because it shows a an example of a Papuan success story.

The post-screening discussion was lively as there were many questions and comments from participants, who all agreed that the films were very good, have strong messages about the everyday lives of Papuans and that the fact that they were made by Papuans themselves added on greatly to their value.

The discussion centered around three main themes; the content and relevance of the films (and the project) to people, video as a tool for empowerment and how these videos are used by the communities, and the process of making the films.

Comments by the audience mentioned that ‘Love Letter to the Soldier’ has a strong political message, but is communicated in a very subtle way, while ‘Pearl in the Noken’, is unique and interesting as it does not focus on a “victim”, as most advocacy films do. It was also noted that ‘Wamena’, which tells a story about the importance of pigs in the life cycle of Papuans, can be considered not only as a “cultural story”, but also one that shows the more complicated socio-economic values of the people in Wamena (and other parts of Indonesia).

One of participants asked how these videos could reach the people in the places they were made, whether they happened to talk about the films and what their reactions were. Trianita, who was involved in the second phase of the Papuan Voices project, said that the films were screened in villages and communities and got positive response and feedback. She also explained the production process, from story development, shooting and editing workshops, to the actual production phase.

It was a fruitful discussion and the participants were impressed by the films. It is beneficial for advocacy videos like those in Papuan Voices are exposed to more academics. One of the researchers said that the films relate to something that they’ve been thinking a lot about: how to engage their knowledge of ethnography into something that can directly reach (and then empower) people. (Nita) 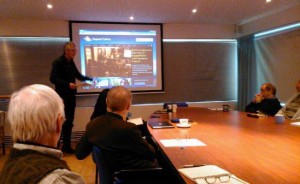 On 27 November 2015, Hendriati Trianita, a former Program Manager at EngageMedia held a Papuan Voices screening in the Netherlands hosted by KITLV (Royal Netherlands Institute of Southeast Asian and Carribean Studies).